Jazz In the Park with The New Standards 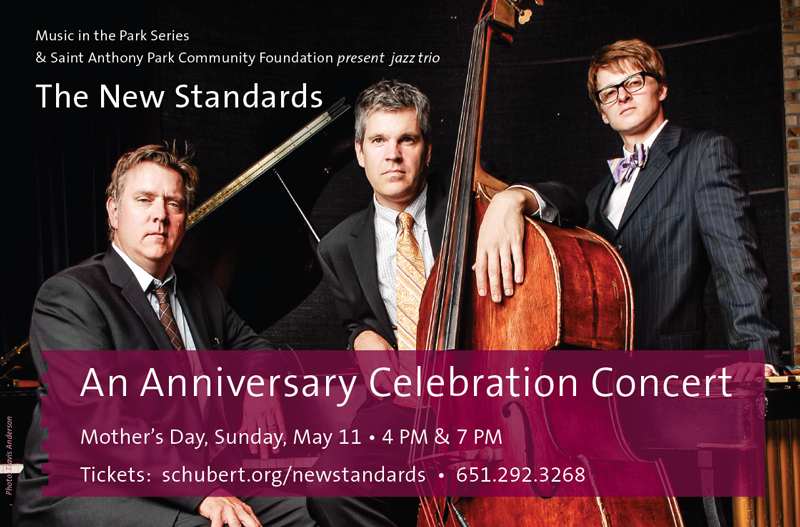 ST. PAUL, MN (January 24, 2014) – The Schubert Club’s Music in the Park Series, in collaboration with the Saint Anthony Park Community Foundation, announces two special Mother’s Day concerts titled “Jazz In the Park” featuring Twin Cities-based TheNew Standards. The internationally known jazz trio will perform two concerts on Mother’s Day, Sunday, May 11 in celebration of a community that has supported Music in the Park Series for 35 years and the Saint Anthony Park Community Foundation for 15 years. The performances (of the same program) are at St. Anthony Park United Church of Christ,4pm and 7pm.
The Mother’s Day date is especially appropriate since the community of St. Anthony Park has given birth to, and nurtured these two organizations, which are unique not just locally, but nationally. Music in the Park Series has offered world-class musicianship in an affordable and intimate setting. The Community Foundation is one of the few neighborhood-based foundations in the area, providing granting for local non-profits and schools, with a special focus on the arts. The New Standards continue this legacy by featuring Saint Anthony Park native son and bass player, John Munson, along with Chan Poling on piano, and popular vibes man Steve Roehm.
Mother’s Day is also a fitting time to remember John Munson’s mother Mary Jane, a long-time arts advocate and active member of the Saint Anthony Park Arts Forum which played an important role in the creation of Music in the Park Series. This neighborhood treasure was founded by Julie Himmelstrup in 1979 (with a grant from COMPAS). With the help of dedicated volunteers and supporters, Julie has guided the Series as artistic director for 35 years.
Key Music in the Park Series funders have included the Boss Foundation, Minnesota State Arts Board, Metropolitan Regional Arts Council, Elmer L. and Eleanor J. Andersen Foundation, Anna M. Heilmaier Charitable Foundation, Saint Anthony Park Community Foundation, and The McKnight Foundation. This special event celebrates the spirit of the St. Anthony Park community and the commitment of the Schubert Club, Music in the Park Series and the Saint Anthony Park Community Foundation to promote the critical importance of the arts in our lives and communities.
In addition to these vital organizations, the neighborhood has been home to 3 governors, Nobel Prize winner Saul Bellow, biologist/essayist Lewis Thomas, Psychologist B.F. Skinner, economist Walter Heller, Nobel Laureate Norman Borlaug, founder of the Green Revolution, Carol Ryrie Brink, author of the classic children’s novel, Caddie Woodlawn, Greg Howard, originator of Sally Forth comic strip, Dudley Riggs of Brave NewWorkshop fame, and Minnesota institution Garrison Keillor.
Concert & Ticket Details
Mother’s Day, Sunday, May 11 • 4:00 PM & 7:00 PM Saint Anthony Park United Church of Christ, Chelmsford Street, Saint Paul Tickets are on sale starting January 29, 9am and can be purchased online athttp://schubert.org/newstandards or (651) 292-3268
About The New Standards
The New Standards are three friends, musicians and raconteurs who have been performing together since 2005 in clubs and theaters everywhere, from Shanghai to NewYork City. They’ve released half a dozen CDs and populated YouTube with a number of popular videos. In their original state, they take the form of an unusual trio (stand up bass, piano and vibraphone), but of-late have been the soul and creative core of a hydra-headed, funny, freewheeling, nutty yet very moving “Variety Show.”
The members of The New Standards all come from bands of note: Chan Poling, the Suburbs; John Munson, Trip Shakespeare and Semisonic; and Steve Roehm, the Texas punk outfit Billygoat and the avant-jazz Electropolis. Wanting an interesting jazz trio repertoire beyond the usual “old standards”, they got together originally to play and sing their favorite songs – particularly post-1960s pop music – in a stripped-down acoustic setting with the freedom of jazz. That conception has found a loyal audience at home and abroad.
More info at thenewstandards.com
About St. Anthony Park Community Foundation
The Saint Anthony Park Community Foundation supports charitable and community activities serving the needs of the St. Anthony Park community, which includes St. Paul’s District 12 boundaries, the University Grove area, 1666 Coffman, the St. Paul Campus of the University of Minnesota, and the Fulham block of Lauderdale. In keeping with its mission, “To nurture the unique community assets of St. Anthony Park to secure a strong and vibrant neighborhood for future generations,” the Foundation has provided more than $250,000 in grants to support the following community assets: Education, Arts and Humanities, Children and the Elderly, and the Preservation and Development of Physical Assets.
more info at sapfoundation.org
About Music in the Park Series
Each season, Music in the Park Series presents a chamber music concert series at the acoustically and architecturally superb Saint Anthony Park United Church of Christ, “home” to the series since 1979. This intimate setting makes possible a connection between performers and audiences that cannot be duplicated in larger halls. It is this special quality about the series that draws composers, performers, and audience members alike to the St. Anthony Park United Church of Christ.
The series offers listeners a rare opportunity to enjoy one of the richest and most varied forms of musical literature. Through imaginative and varied programming, traditional chamber music, jazz, new compositions, and popular music are all available in a context which links rather than separates them. The intimate setting and post-concert gatherings foster a rare bond among composers, performers and listeners of all ages.
“The Music in the Park Series reminds us that chamber music once was the favorite focus of an audience of friends – intimate, familiar, welcoming. Those qualities still exist in St. Anthony Park.” —Saint Paul Pioneer Press
more info at schubert.org/musicinthepark
###